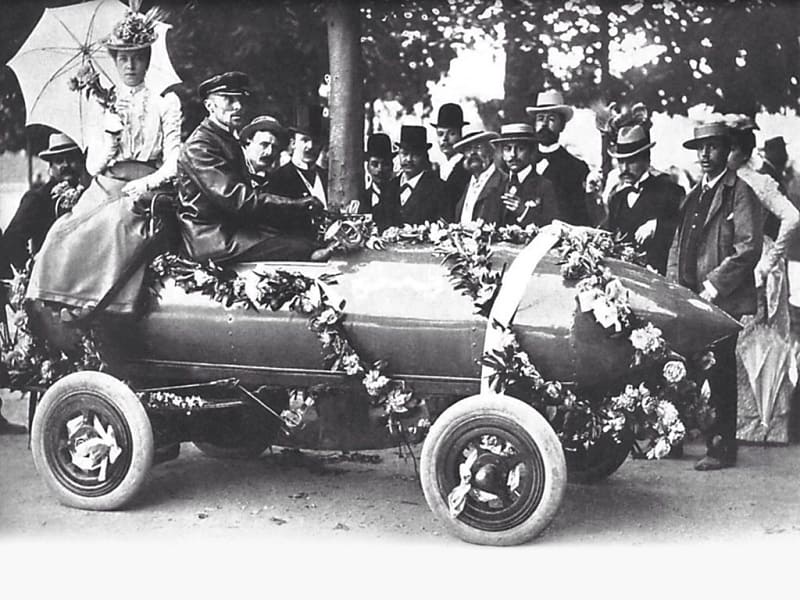 It was Belgian racer and constructor “Red Devil” Camille Zhenatzi who set a world speed record of 105.876 km/h (65.788 mph) driving an electric car.

Electricity-powered cars were rather popular at the beginning of the 20th century. Gasoline vehicles with greater power and driving range supplanted them then.

On April 1, Zhenatzi participated in racing near Paris with his new electric car La Jamais Contente (“Always dissatisfied”). That run was unsuccessful for Red Devil.

The artillery-shell-shaped car with an open driver’s seat looked unusual. The body was made of aluminum and tungsten light alloy and carefully polished.

In-vehicle Fulmen batteries – 100 cells of 2V each provided an operating voltage of 200V. They were heavy, therefore a 3800-mm long machine weighed 1450 kg (3197 pounds). Two electric motors from Postel Vinag with a total power of 50 kW were located near the rear drive wheels with Michelin pneumatic tires.

Next year, he set another record in his new high-speed electric vehicle called Bolid: he covered a distance of 100 km (62 mi) in 1 hour 11 minutes. Later, Camille lost interest in electric cars but took part in a number of competitions as a driver of gasoline-powered cars.

In 1913, Zhenatzi was killed by an accidental shot while hunting. His name forever remains in the history of motoring. Today his La Jamais Contente is kept in the automobile museum of Compiegne, France.

Honda Shows a New Interior Design Philosophy “Simplicity and Something”

Toyota Introduces the Corolla Sport: not a FCEV, but Works on Hydrogen